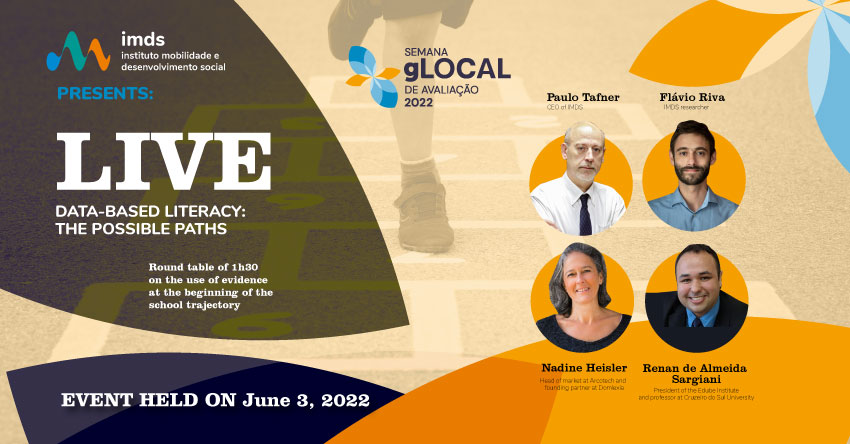 On Friday (03/06), IMDS organized a roundtable discussion (in Portuguese) on the use of evidence to guide best practices in the beginning of the school trajectory. The conversation started from a reflection on how literature has addressed progress in literacy practices, the use of educational technologies (ed techs) in education planning and how to incorporate this evidence in the development of pedagogical plans. The chat ended with the construction of a dialogue with the audience, in which professionals answered questions about different areas of educational planning.

The debate, which was part of the events of the GLOCAL Evaluation Week 2022 - a World Bank project in partnership with FGV-EESP Clear - was attended by Renan Sargiani – President of the Edube Institute (Institute of Evidence-Based Education) and professor at Cruzeiro do Sul University –, Nadine Heisler – founding partner of Domlexia, a platform that brings solutions and content that facilitates student learning –, Flávio Riva – IMDS researcher –, and Paulo Tafner – CEO of IMDS. The four experts used indicators developed from data from the Continuous PNAD (National Continuous Household Sample Survey) and the ANA (National Literacy Assessment) as references when discussing the evolution of the literacy process in Brazil.

The live was started with an introduction by Paulo Tafner. The economist discussed education as a crucial vector for social mobility, addressed poor reading as a barrier to skill formation, interpreting graphs that were produced from the institute's research. The material reflects the influence of the level of education of the responsible in the intellectual development of children and young people and places the two pillars as directly proportional. Paulo ends his speech by highlighting the importance of coping with heterogeneity, through the construction of a pedagogy equalizing differences within the classroom. Pedagogy must be such that it is to reduce performance inequalities from the outset. These, according to the economist, are generated from differences between households. Children who have access to very different family quality end up reproducing these differences in the pace at which each incorporates the skills acquired in school. If the literacy process is not modeled in such a way as to identify the singularities of each child and is not inclusive, the school will tend to increase the distance in the academic performance of these children. The pedagogical process that guides literacy is therefore a barrier or lever for social mobility, and it depends on the public manager.

Renan Sargiani continued the debate with an argument that develops from the UN 2030 Agenda, which emphasizes, in its fourth objective, the need to promote more inclusive education. How far is Brazil from this goal? According to the researcher, the results of ANA 2016 showed that 55% of students in the 3rd grade of Elementary School are at insufficient levels of reading and 34% of students at insufficient levels of writing. The professor also cited, from the data collected by PNAD 2021, that it would have reached 2.4 million (an increase of more than 65% in the pandemic), the number of children aged 6 to 7 who have not learned to read and write, and "who are precisely those poorest children, who are in the most vulnerable layers, who do not have access to materials such as computers, internet and mobile phones and are prevented from having access to effective classes," adds Sargiani.

Nadine Heisler explained the Dom School program, which operates on 3 fronts - phonological awareness, phoneme-grapheme relationship, and vocabulary - and is based on an online pedagogical game. In this simulation, the student goes through five worlds and each world that the child completes, a final challenge is released, which tests whether he/she has really retained what they learned. The program generates online reports for teachers, who manage learning through the data provided, and showed a 56% improvement in the rates of correcting in phonological awareness tests after 1.5 months of application. Flávio Riva debated the program from the researcher's viewpoint and addressed the literature on the use of educational technologies for the formation of human capital. The economist went through the guiding principles of the program – such as the training guided by structured content embedded in software and the playful approach to the learning process, which generates greater participation – as well as the empirical strategy behind the collaboration between the program and the research, guided by the mapping carried out by IMDS.

The roundtable ended with the speakers answering questions from the audience. At some point, there is questioning on how the family can participate in the process of encouraging children during the vacation period and the answers work as a way to bring this so complex debate to its beginning – the small actions of the day to day. "Many don't know this, but the songs and stories are intended to prepare the child for literacy," Heisler says. "They cause the word to be formed with small pieces of sound – the phonemes."

Paulo Tafner
CEO of IMDS, he is an economist and PhD in Political Science (Iuperj/UCSD). Associate researcher at Fipe/USP. He was coordinator of the Ipea Social Security Studies Group, was undersecretary general of Finance of the State of Rio de Janeiro, director of IBGE and superintendent of Anac. He taught at UCAM and PUC-SP.

Flávio Riva
Researcher at IMDS, he holds a bachelor's and master's degree in economics from EESP and a bachelor's degree in social sciences from FFLCH-USP. He was a consultant at the World Bank (USA). PhD candidate in public administration and government at EAESP. Currently works with structuring impact evaluations in pilot projects.

Nadine Heisler
Head of market at Arcotech and founding partner at Domlexia, a platform that brings solutions and content that facilitate students' learning. She has more than 25 years of experience in education and training. Coordinated the Vertical Education of Acate. Her background includes stints at Unicamp, ESPM, Penn University, and University of London.