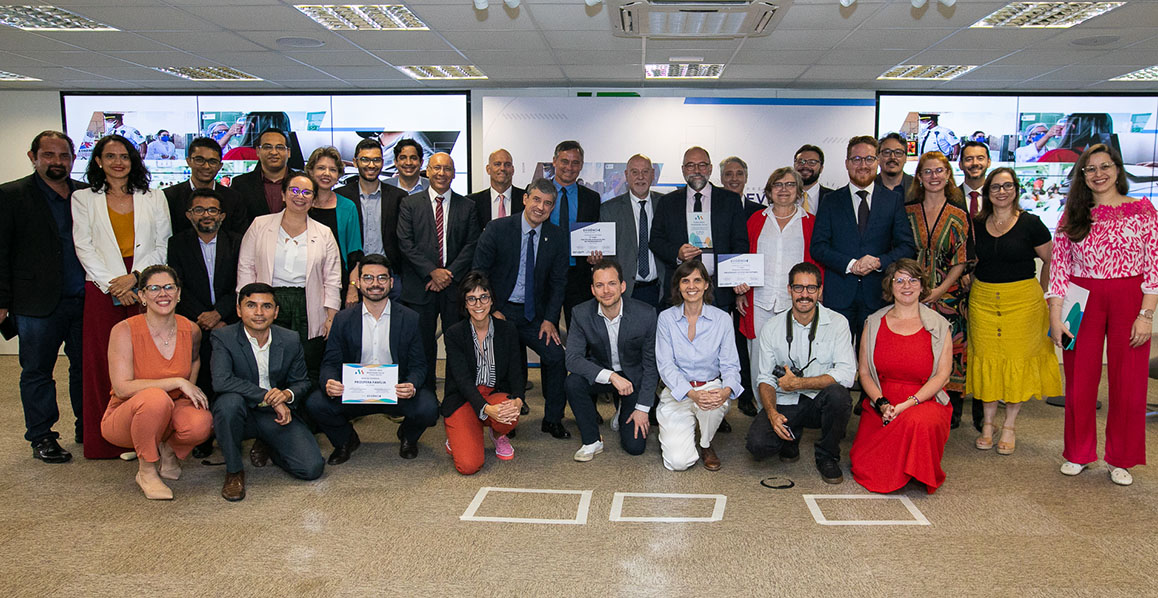 Representatives of the organizing institutions and the Evaluation Committee of the Evidence Award and IMDS Trophy - Social Mobility, and the winning initiatives of the awards. - Credit: CDN/Washington Costa

The celebration took place on the afternoon of Monday, April 25, in Brasilia, and brought together the five winners among the 10 finalist programs, which in turn were selected from the 53 enabled applications, and the three organizers of the award: the Institute for Mobility and Social Development (IMDS), the Center for Learning in Evaluation and Results for Lusophone Africa and Brazil (FGV EESP Clear) and the National School of Public Administration (ENAP).

At the opening of the event, Paulo Tafner, CEO of IMDS, stressed the need for institutions willing to guide and help public authorities implement creative solutions and also the importance of public managers committed to betting on projects fully structured in scientifically based evidence. "I hope that we will reach the end of the award with the feeling of mission accomplished and that our competitors have the perception that this is an initiative that we owe, above all, to public managers who do hard work there at the tip", said Paulo Tafner.

For André Portela, director of FGV EESP Clear, the meeting was an opportunity to extol the inspiring proposals revealed by the award: "After 4 years of preparation, it gives us great joy to see that there are already many actions and many people engaged in making policies based on evidence and focusing on results." Diogo Costa, president of ENAP, stressed the difficulty of being part of a data-based management. "We know that evidence-based politics is not just a method, it is also a movement and a culture. Making this cultural transformation in Brazil is a great challenge," Costa said.

The proposals that efficiently transform the lives of millions of people in Brazil were sent by agencies of the federal, state, and municipal spheres of public administration. Among the five that received prominence at the ceremony is the program "Young with a Future” - a partnership between Unibanco Institute and the Government of Espírito Santo - which won not only the first place of the Evidence Award, but also took home the IMDS Trophy - Social Mobility.

The "Young with a Future" was recognized for its contribution to improving learning outcomes, increasing the High School completion rate and reducing educational inequalities in the country and took home the two main awards. The Unibanco Institute's initiative in partnership with state education networks began as a pilot project in 2007, reaching 11 Brazilian states, and is currently active in the states of Ceará, Goiás, Minas Gerais, Piauí, Rio Grande do Norte and Espírito Santo.

"In this non-strictly governmental public space, we see a virtuous circle forming, a circle that is referenced in science, as the award wants, but which is also referenced in public commitment and commitment to the well-being of all," explained Ricardo Henriques, superintendent of the Unibanco Institute and partner of the project.

The second place of the Evidence Award was the "Pact for Education of Pernambuco", a public policy of the state government that covers all students in the state school system and has as main objective the increase of the quality of education, especially at the High School level.

Pact for Education (PPE), registered by the Government of Pernambuco – Alexandre Rebêlo Távora, Secretary of Planning and Management of the State of Pernambuco.

The third place was divided between two finalist initiatives: the "Use of Evidence in Coping with the Covid-19 Pandemic", of the State Department of Health of Goiás, and the "Behavioral Sciences Program – the CADIN Case", of the Municipal Secretariat of Innovation and Technology of the City of São Paulo. The first, created by the evidence center structured in 2019, aims to support health managers in Goiás in the decision-making process of coping with the epidemic based on the best available scientific evidence and local, national, and international epidemiological data. The project of the innovation laboratory of the City of São Paulo, created in 2018, aims to promote improvements in municipal services based on evidence, based on empirical studies on how people make decisions and through controlled tests of pilot solutions. The winning application was the reformulation and simplification of the IPTU collection letter, which was successful in its search for the reduction in the default of the municipal tax.

Use of Evidence in Coping with the Covid-19 Pandemic, registered by the State Department of Health of Goiás - Luciana Vieira Tavernard de Oliveira, UnderSecretary of Health of the State of Goiás.

After hearing what the finalists of the Evidence Award and the IMDS Social Mobility Trophy discussed at the roundtable of the award, the guest of honor of the event, Sérgio Calderini, secretary of SECAP of the Ministry of Economy, the secretariat responsible for coordinating the Council for Monitoring and Evaluation of Public Policies, CMAP, congratulated the competitors and said he had identified himself with the problems that these public servants face.

"The Award allows not only to shed light on these great experiences, but to give examples and point out various paths, which we all have in the great fields of administration, so that we formulate good public policies. The examples delivered here, submitted in these applications that reached the Evidence Award, are a great incentive for every Public Administration servant," said Sérgio Calderini.

In addition to the IMDS Trophy, Paulo Tafner and Sergio Guimarães, respectively CEO and Research Director of the Institute for Mobility and Social Development, also delivered an Honorable Mention to one of the initiatives that promote the application of scientific knowledge in actions that generate an impact on social mobility.

The "Prospera Family", of the Secretariat of Social Development of the State of São Paulo, aims to overcome the limitations usually faced by traditional public policies aimed at the population in extreme poverty. To this end, the program created in 2019 makes a multidimensional intervention that combines both elements of productive inclusion and promotion of resilience. At the end of the process, the intention is that the participants are on a sustainable trajectory of expanding their income.

Prospera Family, registered by the Secretariat of Social Development of the State of São Paulo – Danilo Erly Achucarro Nogueira, Coordinator of the Prospera Program of the São Paulo Department of Development.

The award ceremony held in Brasilia was broadcast online and can be seen in full here.

Want to know what happens in the Evidence Award and IMDS Trophy – Social Mobility and know all the disclosures, including new editions of the award?  Continue accompanying us here.